Obama spread a little holiday cheer with a visit to the Boys and Girls Club in northeast DC, where he read “The Polar Express” and shared a basket of cookies with the kids.  He also took the opportunity to chat about the meaning of Christmas.  Although the cookies don’t exactly fall in line with FLOTUS’ children’s nutrition work, can you blame POTUS for handing out Bo-shaped cookies?

I was up baking these all night! (AP Photo/Charles Dharapak)

Obama expressed surprised at the technologically advanced gifts the kids were hoping for.  His response to hopes for Playstations and cell phones?  “Whatever happened to like, asking for a bike?”

All I want for Christmas…

Obama’s no grinch, that’s for sure!  He’s playing Santa to more than just those bail-out recipients.  Six-year old Jasmina Anema, who has leukemia, was scheduled to meet the Prez over Thanksgiving, but fell ill and had to be admitted to Children’s National Medical Center.  She wouldn’t be deterred, though, and made it back to the White House to lay claim to her Make-A-Wish Foundation wish–to meet our POTUS.

Her visit couldn’t have gone better, either.  Obama chatted her up about books and reading while holding Jasmina’s IV bag, and didn’t let her leave without a box of presidentially sealed M&Ms, a yoyo (old school!), and a big hug with the promise, “You can write me any time.  I’ll get it.”

What did Jasmina tell Obama she wants for Christmas?  A violin.

I really wanted to play with Bo, but I guess meeting you is okay, too. (White House Photo, Pete Souza)

As the country gears up to celebrate Thanksgiving, Obama followed a tradition started by George Bush in 1989–that of pardoning a turkey.  Courage was this year’s lucky fowl, and Sasha and Malia helped with the pardon.  One may ask–what does a POTUS-pardoned turkey do after Thanksgiving?  Go to Disney World, of course!  After Courage serves as grand marshal at the Disney parade, he’ll spend the rest of his days there in safety and solitude.

Can we keep him, Dad? I'm sure Bo wouldn't mind! (AP Photo/Alex Brandon)

Later in the day, the entire First Family traveled to Martha’s Table, an organization serving DC’s neediest, to volunteer for an hour handing out pies, stuffing, fresh veggies, and turkeys (not all gobblers were so lucky this season!).   The Obamas were joined by FLOTUS’ mother Marian Robinson and POTUS’ sister and brother-in-law Maya and Konrad Ng.  What a family–going from a gala dinner to serving food to those in need! 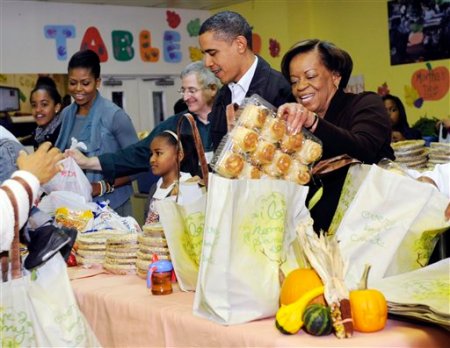 Packaged biscuits? What would the Pilgrims think? (AP Photo/Susan Walsh)

As for Thanksgiving dinner, the White House has been mum on plans.  Maybe they’ll have leftovers from yesterday’s State Dinner?

Obama-ji’s karma is through the roof

Obama celebrated Diwali yesterday, the Hindu Festival of Lights. Although Bush started this White House tradition, Obama is the first prez to attend the actual ceremony, which involved lighting an oil lamp. Guests each received a small box of sweets blessed by the priest. POTUS also signed an executive order that restarted an Advisory Commission and White House Initiative on Asian American and Pacific Islanders. Maybe this is call for Part II of My Name is Khan? BoL’s big question–where was Kal Penn through all this?

What does the sole yellow box hold? (Getty Images)

Here’s a video of the festivities (begins with a Penn Masala a cappella performance; Obama arrives at 5:06, and the Diwali celebration begins at 13:40). 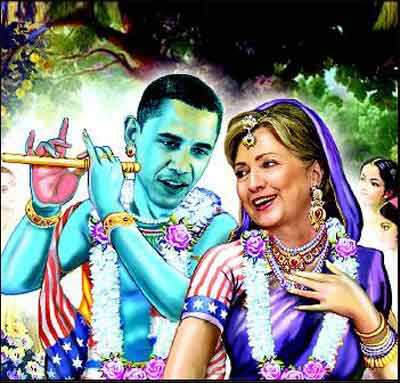 It's marginally related to this post, but too good to pass up, yaar! (TOI Photo/Neelam)

The Obamas threw a Fourth of July party that rivaled the best backyard bbq. The celebration honored US servicemen and women with a variety of traditional Independence Day eats (burgers, icecream, watermelon, etc), not to mention performances by Michelle Branch, Foo Fighters, and Jimmy Fallon (all of which was streamed live from whitehouse.gov).

Kids had access to games, face painting, and balloon art. A few former presidents even made an appearance.

Obama’s address to his guests, he said “When she was young, I used to say that all these fireworks were for her. I’m not sure she buys that.”

"No, really, honey, these fireworks are just for you." (AP Photo/Alex Brandon)

The Foo Fighters had been on hiatus for a few months previous to the show, and gave the guests a preview of material for their new album.

For more of the Foo Fighters’ performance, see here and here.

The Pres and First Lady marked their presidency’s first Cinco de Mayo.  Not with much pizzaz or on the right day, but marked it nonetheless.

In pre-celebration, FLOTUS visited the Latin American Montessori Bilingual Public Charter School in DC on May 4.  She watched the children perform, said a few words, and took questions from the students and teachers.  Michelle was asked if she’s ever tried Mexican food.  (Uh, who HASN’T?)  Her response: “Oh, let me tell you, Mexican food is my favorite food in the whole wide world. I think I’m on record.  Ooh, what do I love? I love — Oh, I love tortillas. I love tamales.  I love beans and rice. I love mole. I love all the mole sauces, I love beef and lamb and quesadillas. I mean, you name it. The question is, what don’t I like? I love it all.”  ‘Nuf said.

Later in the day, Obama invited guests to the White House to celebrate.  In his opening, the typically rico-suave prez actually stumbled over his words.  He’s human!!!!!  In his remarks, Obama said “Welcome to Cinco de Cuatro.”  This will likely be the only slip-up Obama endures for his time as president.

THIS is the party? (Ap Photo/Gerald Herbert)

The POTUS With the Mostest

Washingtonian magazine is honoring our new president with a cover story. Not just any cover story. One that will set hearts aflutter while scoping out the magazine rack at the grocery store. How do you think Michelle feels knowing women (and men) the country over are lusting over her hubby’s fine frame?

Another question: why the heck did Washingtonian decide to alter the color of Obama’s shorts from the original photo?

If only all our public servants looked like this! (Bauer Griffin)