For a svelte athletic type, Obama sure likes his cow meat.  The Prez and his entourage descended upon a Five Guys near the DC Nationals stadium for lunch today, and set the hearts of like-minded burger lovers aflutter.  POTUS ordered a cheeseburger with the works (including jalapenos!), along with 2 bags worth of extras for his staff back at the White House (and perhaps for Michelle, who hit another DC Five Guys earlier this year).

That peanut pit has got to be a public health hazard! (AP Photo/Gerald Herbert)

Obama was there with Brian Williams of NBC, who is taping “Inside the White House.”  Our main questions: had Obama heard about the recent FG closing?  Perhaps our Man of Steel also has a Stomach of Steel?  See this series of videos, and you’ll feel like you were there.  If only Barry’s order had been number 44… 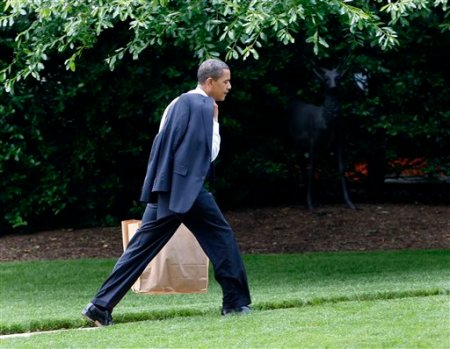 That's a LOT of burgers (PS. He carries his own take out!) (AP Photo/Gerald Herbert)

Turns out our POTUS wasn’t always the picture of cool he is today.  No, turns out that when he was a freshman, he still sported some baby fat, featured a demi-fro (we pray that look will come back), and thought cigarettes were cool.

Even in 1980, though, Barry caught the ladies’ eyes.  While a freshman at Occidental College (before transferring to Columbia), classmate Lisa Jack asked if she could take a few photos of him for her portfolio.  Ever the public servant, Obama agreed.  Thankfully for POTUS’ adoring fans, Ms. Jack was able to find the old roll of film in her basement. 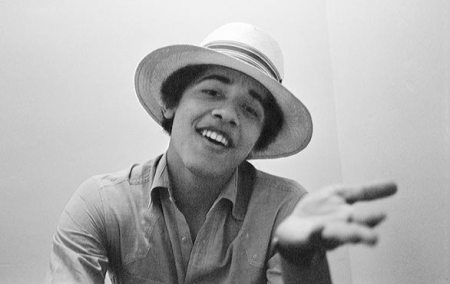 Bravo has announced the newest edition to their always seedy and ever tantalizing hit series, “Real Housewives.”  That’s right, DC will now have a chance to show the country (and world?) that not just Orange County, Hotlanta, New York, and New Jersey house trashy and desperate middle aged ladies who lunch.

BOL can only hope that Michelle chooses to class up the Bravo franchise with her brains, style, and rockin’ biceps.  Other unsoliticited suggestions for casting: Michelle Rhee, Michelle Fenty, Jill Biden, maybe even Helen Thomas?

In reaction to the recent surge in pirate activity (not the fun Johnny Depp variety), POTUS proved that he’s willing to meet any leader “without preconditions.”

In actuality, Obama was posing with his speechwriter, Cody Keenan, as material for his White House Correspondent’s Dinner speech.  The audiovisual appeared when Obama said, “But as I said during the campaign, we can’t just talk to our friends. As hard as it is, we also have to talk to our enemies, and I’ve begun to do exactly that.”

The Prez welcomed Super Bowl XLIII  champion Pittsburgh Steelers  to the White House today. As you may recall, back in February, Obama said he was cheering for the Steelers, despite having hometown love for the Chicago Bears. Why? The Steelers Organization (including players, Coach Tomlin, and Chairman Rooney) have a special bond with Obama — they hit the campaign trail with him last year to deliver a swing state, Pennsylvania and growing up in Hawaii, Obama said he adopted the Steelers as his team.

In fact, Obama’s bond with the Steelers is so strong that he nominated Chairman Dan Rooney as Ambassador to Ireland.  In addition to celebrating the Super Bowl win, the Steelers and US soldiers worked to assemble care packages for US troops. How sweet! Do you think they packed pierogies? BTW — major upgrade in the jersey from the campaign trail (08) to POTUS (44)!

Hubble, We Don’t Have a Problem..

POTUS made a long distance call to the crew aboard the space shuttle Atlantis yesterday. The astronauts were sent to repair the Hubble Space Telescope. Noting that 2 of the crew members were from Illinois, Obama asked them to check on his Chicago home to see if the grass was being mowed. Listen here for the actual call!

The phone bill at the White House must be something else, as this was POTUS’ second call to space. In March, POTUS invited DC school children to the White House to speak with astronauts aboard the shuttle Discovery and International Space Station:

He’s such a Doll!

Barack Obama is more than just our President. He, as is the rest of the family, is a branding/marketing dream come true! Everything he touches practically turns to gold. It wasn’t long after he hit the primaries that the Barack Obama Action Figures made their debut — take a look at what’s on the market.

These are some of the American cartoonishy looking dolls, which will probably be collector’s items someday (although, I’m not sure who is in the market for them, and not sure that I’ve ever seen Barack in a white suit).

Day and Night Barack? What's with the white on white? (photos from http://www.barackobamafigure.com/index.html)

The Japanese have perfected the Barack Action Figure — they are   posable, have interchangeable hands, various weapons including a lightsaber, and red and blue ties!

This dexterous doll does it all, from fight stance to night stance (photos from http://gamu-toys.info/sonota/sw/obama/obama.html)

The Russians also got into the action — but are much more metaphorical. This set of Matryoshkas, traditional Russian nesting dolls, depict Barack Obama and GW! 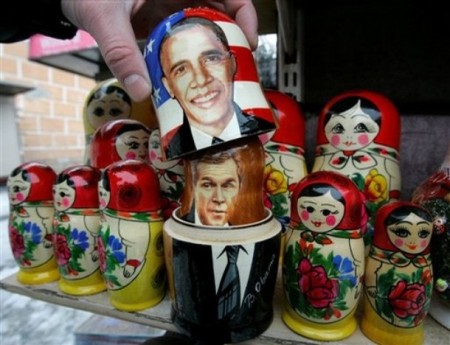 Everyone’s favorite FLOTUS hit the NY glamour-ground running Monday when she served as honorary co-chairwoman opening night at the American Ballet Theater, where she was introduced by Caroline Kennedy. 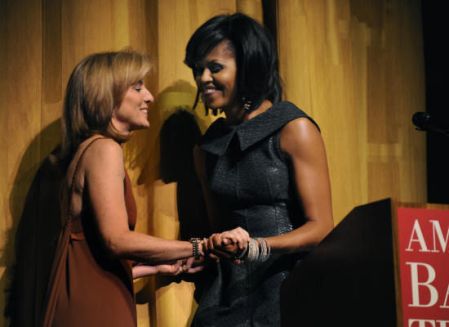 Anyone got tickets to the gunshow? (Timothy A. Clary/Agence France-Presse/Getty Images)

Earlier in the day, Michelle served as ribbon cutter for the reopening of the American Wing at the Metropolitan Museum of Art, where she rubbed shoulders with the likes of Ralph Lauren, Iman, and Anna Wintour.

The Big news out of the White House today (aside from meetings with representatives from Bosnia and Herzegovina) is that 007, Pierce Brosnan, made a visit to the West and East Wing. And the purpose of the visit, you ask? It has nothing to do with thwarting Korean billionaires….just saving WHALES! While Brosnan didn’t meet POTUS himself, he did get to pow-wow with some cabinet members. All this Bond news, brings up the point that our fair leader and 007 have a lot in common! You decide who you’d rather have a martini with…

Sorry Pierce, Daniel Craig is a hotter Bond...and these guys are putting Baywatch to shame! (Photos: Casino Royale movie and the Associated Press)

The choice is quite clear — he looks great in a tux: 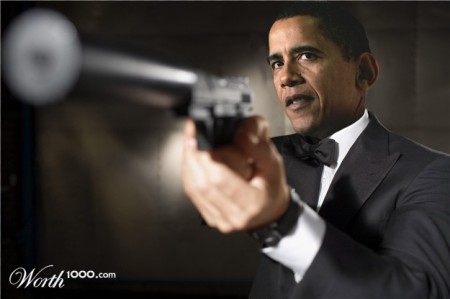 Do you want a clean kill or do you want to send a message? (Photo courtesy of Sudiptatatha at Worth1000.com)

and most importantly a smart & beautiful sidekick!

She's got beauty, brains, and her own set of guns (photo: Michel Euler/AP Photo)

Recently in Newsweek, POTUS mentioned that he saw the new Star Trek movie — and why not?  “Everybody was saying I was Spock, so I figured I should check it out and—[the president makes the Vulcan salute with his hand].”

Apparently, POTUS loved  Star Trek while growing up — “You know, Star Trek was ahead of its time. There was a whole—the special effects weren’t real good, but the storylines were always evocative, you know, there was a little commentary and a little pop philosophy for a 10-year-old to absorb.”

So in the spirit of the final frontier….I present to you: Spock Obama, himself.

Nowhere am I so desperately needed as among a shipload of illogical humans. (Photo courtesy of NYTimes Illustration)

Please, Captain, not in front of the Klingons (photo courtesy of Film Score Message Board)

One last morsel of geek-in-chief — when Obama met Leonard Nimoy (a long time Obama supporter), he threw up a Vulcan sign! 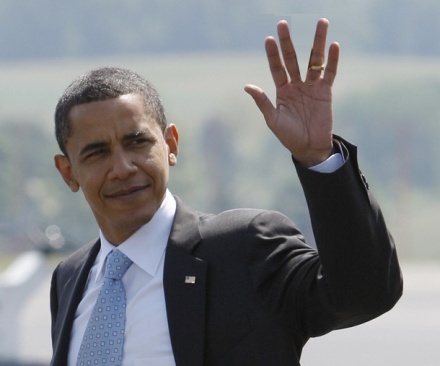 It is the ponn farr - the time of mating (photo courtesy of TrekMovie.Com)

Barack of Love
Blog at WordPress.com.